If you haven’t noticed, the Lenten season is always heralded by an increase in seafood options at your local fast-food joint. Wendy’s alaskan cod is back! Filet-o-fish… 2 for $3.49! I think Subway even gets in the mix with a “crab” meat sub (yikes!). I don’t know where the idea that fish meat doesn’t count as “real” meat came from, but I will proudly be the first in line at a fish fry! 😉 Fish has often been included in various vegetarian (pescetarian) lifestyles, and so for people fasting from meat for Lent it is a welcome alternative.

I am not fasting from meat for Lent, however, over the past few years Sam & I have been building more meatless meals into our eating habits. And, after watching a documentary a few weeks ago, we were re-inspired to focus on eating a more plant-based, whole-foods diet. The basic gist of the movie (and you can find it on Netflix instant) is that we live in an instant-gratification culture that focuses less on what we’re eating and more on how we’re going to medicate ourselves after we’ve eaten ourselves into an unhealthy stupor. We don’t intend (at this point) to go vegan by any means, and getting a toddler to eat primarily vegetables is a challenge all on its own, but we are taking small steps to eat in healthier, more whole, and more compassionate ways. 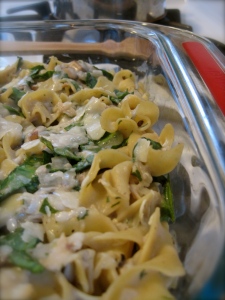 attention to how I spend/use our resources when it comes to groceries. I’ve tried to be more mindful of using up what I have at our house before I buy more/new food and meal-plan so food (specifically produce) doesn’t go to waste …this may sound like a pretty basic concept, but it is shocking how often I can look at our mostly full fridge & pantry and think – there’s nothing here to eat! With that in mind, last week I had some cans of tuna and a bag of egg noodles in the pantry and I decided to try a “veggie” twist on tuna casserole. I’ve always liked tuna casserole but the hubs isn’t a fan of peas so I modified this Rachael Ray recipe and came up with a delicious “meatless” alternative – in fact, you could omit the tuna all together and it would be just as good! 😉

Directions: Preheat oven to 400F. Cook pasta & set aside. In a pan, saute the onion in olive oil until soft (about 5 mins) add in the mushrooms and cook until they begin to release their liquid (4 mins) and then add the garlic so it doesn’t burn. 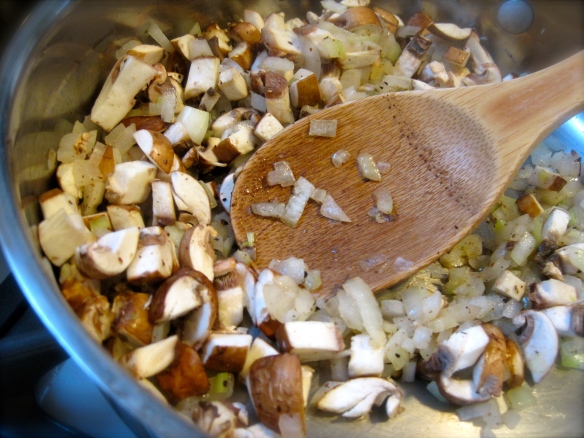 Add the spices and flour and then add the water to make a veggie broth. Stir in the milk and cook until the sauce is bubbly and thick. Add parsley and spinach until well combined and finally add the tuna, pasta, and top with cheese (save a little cheese if you want to sprinkle on top).  Pour mixture into a 9×13 baking dish and sprinkle with remaining cheese. Bake for 10 mins or until the top is golden. 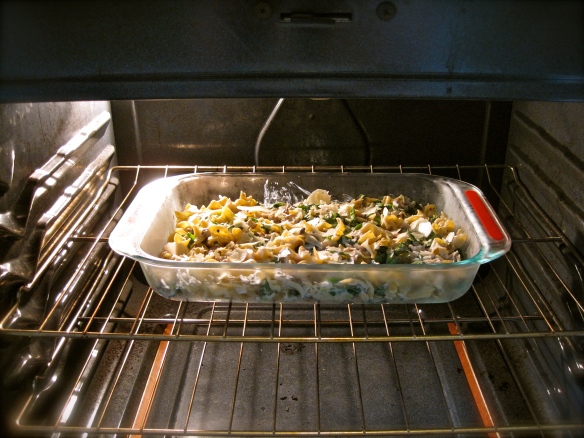 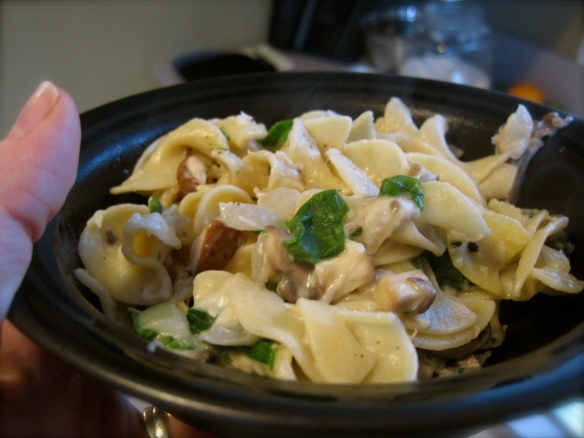